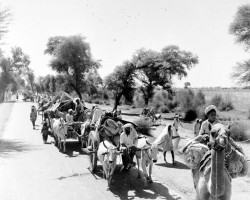 In the post-Empire world, the natural place to turn for help was to men from the New Commonwealth. They had fought bravely alongside British regiments in the war: "You know us and we know you" was the motto. With full support from British politicians of all the major parties, who had a vested interest in increased prosperity, agents were despatched and offices were established to recruit men to come to augment the workforce.

The first target catchment area was the Caribbean but this soon failed to supply sufficient manpower for the ever demands of industry and the service sector. Soon attention was turned to the Indian Subcontinent where there had been a tradition for generations during the time of Empire to recruit workers and re-settle them in other lands under British rule to build up developing economies; this was the story of Indians who were taken to East Africa or Malaysia by the British to develop railways and skilled engineering works.

Much of North India especially had been thrown into upheaval at the time of Partition in 1947 with the division of the Subcontinent to form the new countries of East and West Pakistan (from 1971, Bangladesh and Pakistan) and modern India. The historic region of the Punjab had been divided with great loss of life in 1947 as millions crossed the new international borders; the same happened in the East with the division of Bengal. Many Muslims from further south in the new India had fled north to re-settle in a land that was strange to them in terms of culture, language and ways of life, in cities like Karachi, the capital of the new Pakistan. The future of two areas in particular were left unresolved by British withdrawal: Hyderabad Deccan and Kashmir. The future of Hyderabad Deccan was settled by the new Indian government in 1948 when it was annexed. At this time many professionals from Hyderabad moved to Britain where their skills were needed as doctors, managers, lawyers and accountants. Kashmir remains a disputed territory to the present day. Whole extended families, often comprising dozens, even hundreds, of people became rootless as they were forced to leave behind homes, lands, family graves and traditional ways of life. This also compounded the economic pressures on men from various regions, notably the Punjab, Kashmir and Sylhet, who for generations had travelled in search of work in the British army or the merchant navy.

Many regions became target communities for the recruiting agents from Britain. In the later 1950s, these areas supplied a ready source of unskilled male manual labour that was so much needed in Britain. From 1960 onwards, in the district of Mirpur, the major Mangla Dam project saw 250 villages flooded, resulting in the displacement of an estimated 100,000 people. This had a significant impact on migration into Britain and to this day he resultant migration represents the largest segment