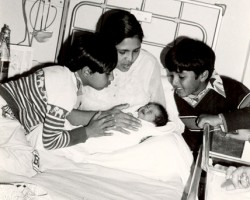 The Notting Hill riots of 1958 and the political discussions that followed paved the way for the Commonwealth Immigrants Act 1962, which aimed to put limits on the practice of migrant working and limit the number of people coming to settle in Britain. Discussions leading up to the Act saw a major change in mentality. Men who had migrated to and fro for work saw that this practice was going to be halted. To return to their families permanently would have a major social and economic consequence on whole communities.

In effect, the change in law forced transitory migrants to make a choice of where they were to live. Many went back never to return to Britain, but many also made the decision to "beat the Act" (and relocate their wives and children to Britain) before the legislation could come into force. 130,000 immigrated to Britain in 1961, and in the first six months of 1962, before the Act came into law on 1st July, a further 80,000 arrived. From this time onwards, the earlier form of transitory migration slowed down and the emphasis shifted to "family reunification" whereby men settled in employment in Britain called members of the family to come and join them. A system of immigration vouchers was adopted as the preferred method used by the government to control numbers. A much higher proportion of migrants arriving after the Act were recently married women coming to join their husbands, often with infant children.

All this saw a major social change in the inner cities of Britain. They went from places with groups of single working men, who made little demand on the social infra-structure, to areas for the re-settlement of families comprising women and children. In social terms the change to families meant that Muslims were more truly making the transition from being Muslims in Britain to being Muslims of Britain, especially as children were not only being schooled here, but were British by birth in slowly increasing numbers.

Change also change brought with it a demand for individual family housing, shops, schools, community facilities, healthcare and social support for women, many of whom were not used to living outside their extended families and lacked the social and linguistic skills for settled community living in Britain.

The arrival of immigrant families coincided with massive development of new post-war council housing in many cities, which was available for those who had been lived in the city for much longer periods of time, often since birth. What happened in effect was this: non-immigrant (white) people could relocate to new housing in new areas, leaving behind their former homes. These were poor quality Victorian housing stock in the inner cities and so there was a natural tendency for immigrant families to buy or rent privately such houses. Thus, this combination of new housing policies and clusters of old housing created social trends referred to as "white flight" and, elsewhere, "ghettos". Within less than a decade, the face of inner-urban British social life was transformed to take on the feeling of becoming a new community home for the recent migrants.

New communities brought with them the customary and religious practices and languages of their region of origin. Especially for the women, who knew only local community languages, it was important to live in an area where one could survive in Urdu, Punjabi (or its Mirpuri dialect), Gujarati, Pashto or the Sylheti dialect of Bengali. Extended families might be spread through many towns and cities in Britain and so family reunions became important ways to keep in touch at times like births, weddings, religious festivals or to commiserate at times of family deaths. Some of those with greater professional skills and longer residence in Britain set up Welfare or Workers' Associations to offer advice on legal, financial and employment matters, especially immigration cases.