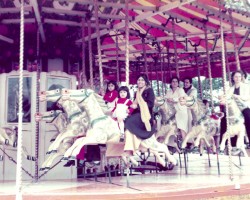 Children had to negotiate their two worlds of home and school

As newly arrived families lacked the residency requirements to qualify for council housing, they were to be found in the private rented sector and in owner-occupation of smaller and poorer quality housing. A survey in 1969 showed that 85% of immigrant families had higher than average numbers of people per room in the house and such families had typically between 18 and 29% less space in the house. Similarly a survey in 1971 showed that immigrant families were five times more likely to be sharing accommodation and nine times more likely to have to share cooking facilities.

The pattern of settling where there were demands for labour meant that immigrant families were not spread evenly throughout Britain, or evenly within a region or city. In the Yorkshire/Humberside region, 83% of people with Pakistani or Bangladeshi heritage lived in the Metropolitan District of West Yorkshire, and more than half of those, in the city of Bradford. In Birmingham, 75% of such people were concentrated in eight of the city's 42 Wards.

The social consequences of this pattern of immigration were significant. The extended family was fragmented, thus requiring an effort of reinforce it through visits and marrying within the group. The older generation of grandparents etc. tended to remain in the country of origin, thus making the age profile of the British families much younger. Different elements within the extended family might be dispersed throughout Britain, thus weakening family ties and requiring regular reunions.

Men were often working extended hours thus were not around for parenting and socialising with their wives. Women were often isolated coming from a culture in which the world divided between extended family and "strangers", thus requiring new forms of social mixing, even within the same cultural and linguistic groups. Women were thus slow to gain the necessary social skills to interact with other parts of British society. Children had to negotiate their two worlds of home and school, and were often called upon at a young age to negotiate wider society with their mothers. Communities naturally clustered around shops, mosques, madrasas and community facilities to sustain their common life.