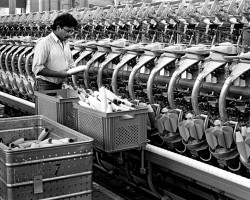 The characteristic of this early migration was that it was temporary, to gain money to maintain families "back home" in the communities of origin. These were fit young men, who left their families to take any available work and as much overtime as they could find. They made little demands on British social life and lived in communal houses which were often overcrowded, where they lived as cheaply as possible so that they could make the largest possible remittances to those left behind (a Select Committee report in the late '60s estimated that more than half of annual earnings, some £50-60m, were being repatriated).

Often they settled in the poorest housing stock which was being vacated by families moving out during slum clearances. The average working wage in Britain was some twenty-times higher than that in Pakistan, so if a family had one member working here, he could send sufficient money home to keep the whole family and allow them to establish themselves. Men would work for months to accumulate funds, which they could take home on a visit secure in the knowledge that when they returned to Britain there would be plenty of demand for their labour. In this way, these men were transitory migrant workers.

Recruiting agents would have a particular relationship with regions and industries in areas within Britain. The migrant men here who had established a good reputation as reliable workers were encouraged to recruit more young men on their periods of home leave. This established a practice that had a long history in earlier migrations from Wales, Ireland and other parts of Europe known as "chain migration" where the workforce in a particular factory or town would be drawn from families and villages in the "sending countries" so that many of the men would be related. Later this would have an impact even in districts within British cities which were populated by inter-related families, almost like "transposed villages" from the sending countries.

Such a pattern of migration led to some racial tensions in the 1950s and attempts were made to legislate against racial discrimination from 1951 onwards. Many of the early migrants absorbed racial discrimination by keeping a low profile and grouping together for community support. The mentality was that "we are here only to work and gain money to support families at home". There was an assumption that such migrant workers were only temporary residents in Britain and so they tended not to get involved in Trade Unions or the political parties. It was in 1958, with the Notting Hill "race riots" (involving Afro-Carribbean migrants), that veils were lifted from many eyes that had been clouded by the drive for prosperity and the abundance of work.