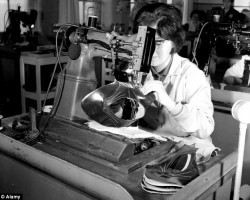 The 1950s were a time of prosperity for Britain. So much so that in 1957, Prime Minister Harold Macmillan coined the phrase "you've never had it so good".

The old slums were being cleared away and a huge number of new houses were being built. New road systems, including motorways, were starting to change urban and national means of travel, which led to a great demand for new vehicles of all sorts, resulting in a thriving automotive industry. Worldwide stability and prosperity after the war led to a drive to export British goods, which had its impact on ship-building and manufacturing industries. Britain had a thriving textile industry in the mill towns of the North. Such an expansion in manufacturing industry had a knock-on effect in transport, education, science and technology, and the demand to move goods around Britain and, by sea, to the rest of the world.

Factories were working two and three shifts, six days per week. It was a time of full employment: people said, "leave your job in the morning and you'll find a new one that same afternoon". Trade Unions were strong, making sure that working men and women were well treated and shared in the new prosperity. Many women had entered the workforce during the war out of necessity but now they stayed on through choice to enjoy the benefits of their own income and growing independence.

There was a need for more labour. Men travelled from the rural regions of Britain to seek work in the industrial centres; from Scotland, Wales, the English countryside and from Ireland. Men came seeking work from central Europe, Poland, for example, and southern European countries like Italy. Often men whose first language was not English, would group together in certain localities and industries for social support and solidarity. Clubs, pubs and religious establishments became centres where people could meet to find support, hear news "from home" and find trustworthy travellers to carry money home to families who had been left behind. And yet still, there was a shortage of labour.